With St. Patrick’s Day being only 5 days away, lets look into something else with Irish Heritage Month.

Many of us start our day with the reading of our horoscopes, but what if there was a different horoscope that you didn’t think to check? I am talking about Celtic Astrology.

Before Ireland became a home to Christianity, it was home to the Druids. Many think that the druids were the celtic version of hippies, but in reality they were the Celt’s philosophers, priests, scholars and poets.

The Druids believed trees to be sacred. They believed that trees were home to spirits called dryads, as well as infinite knowledge and wisdom.Trees even came to symbolize life, death, and renewal, they even used the trees as a basis for the Celtic Ogham  (Celtic Tree Alphabet) where each symbol or letter was the name of a tree.

The Druids gave each tree it’s own quality and meaning, soon they noticed that certain trees matched those of children who had been born at certain time during the year. The knowledge they gained from this gave them insight and clarity into the people of their life.

So how does Celtic Astrology work? Celtic Astrology uses the phases of the moon to determine their zodiac. A year is broken down into 13 months each with 28 days. Based on this, there is only one day that is considered extra, and that day is December 23rd, which is referred to as “Nameless Day”. Each month of the zodiac is  then associated with a different tree.

With Celtic Astrology, much like our zodiac there are other signs that are associated with your birthday, there is you Celtic Animal Zodiac, a Gemstone, a Color, and an Ogham letter.Check out the chart below, that I found at tarot.com to see where you fall on the Celtic Astology breakdown. 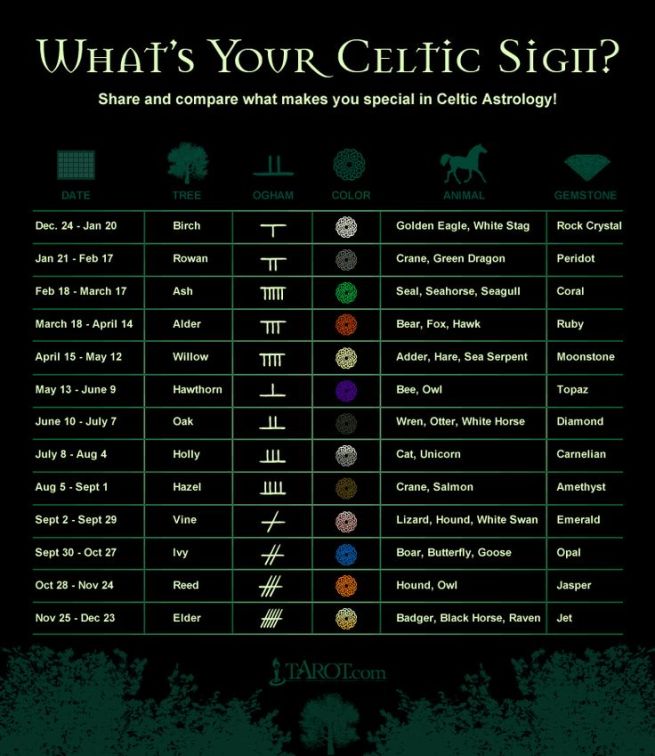 Graphic Designer, Photographer, Amateur Cook, and all around geek! I love music, art, fashion, comic books, Doctor Who, Captain America - you name it, I love it! View all posts by Cathy | LoveGeekyMe